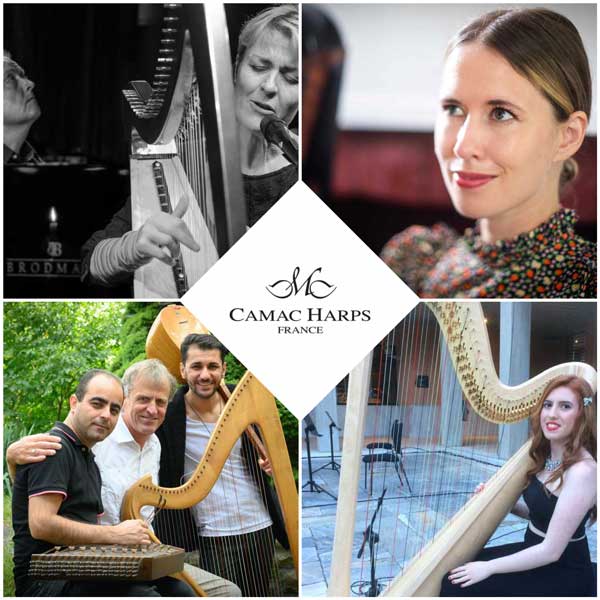 Corrina Hewat & Dave Milligan have been creating music together since the early 1990s, when they formed the band Bachué. Always with the duo of harp and piano at the heart of their music, the band evolved over the following years, releasing three critically acclaimed albums: Bachué Café (1996); A Certain Smile (1999) and The Butterfly (2004). Consistently lauded for their ground-breaking and jazz-inflected approach to Scottish traditions, their music has inspired a whole new generation of players and their three releases are often cited as a source of inspiration for new music being created to this day.

Their passion for exploring and fusing styles grew, eventually resulting in the birth of The Unusual Suspects; one of the most ambitious and successful large-scale music ensembles in modern Scottish music. In the intimate format of duo again, Hewat and Milligan explore the repertoire of Scottish and Celtic traditions, blended with original music & songs and delivered through a wide lens of musical vocabulary and style.

Enjoy a rare and intimate solo concert with US Based, Edinburgh-born Harper, Maeve Gilchrist. She will be playing solo versions of repertoire from her latest release The Harp Weaver, as well as a couple of new tunes and even a bit of poetry!

Sparkling sounds of the santur, the Persian hammered dulcimer, mix with soft harp chords and melancholic melodies on the saz, the long-necked lute of Anatolia. Tarab Trio offer a colourful programme ranging from Kurdish folk dances and early music of the Ottoman court to Balkan rhythms and expressive songs in Arabic and Kurdish. The trio was formed in 2015 and has performed frequently in concerts and festivals, winning many fans and admirers.

We are pleased be able to include these performances which were organised by Professor Ping Zhang of the Scottish Confucius Institute for Business and Communication at Heriot Watt University. Thanks to Professor Zhang and Steve King Director of Music at Heriot Watt for permission to play these recordings at EIHF 2021.

The Guzheng Ensemble plays a 20th century piece Fighting Typhoon which portrays dock workers fighting against the devastating effects of the storm. The guzheng, like the clarsach, is an ancient instrument which has been developed into its modern version which we hear today.

The Folk Music Ensemble performs The Ancient Tea Horse Road. Sometimes called The Silk Road, this is an ancient trading road stretching over 4000 kilometres between China and South East Asia.

Yiota’s award-winning composition The Path invites the listener to dive into deeper emotions, past experiences and nostalgic moments and to take a moment of reflection on the trajectory of life. The piece is offered to the audience as a blank canvas where everyone can project their own feelings and experiences. To Yiota, it expresses a personal trip into her deeper thoughts and emotions and she is delighted to share it with the audience through this performance.

Supported by the Edinburgh Branch of The Clarsach Society.