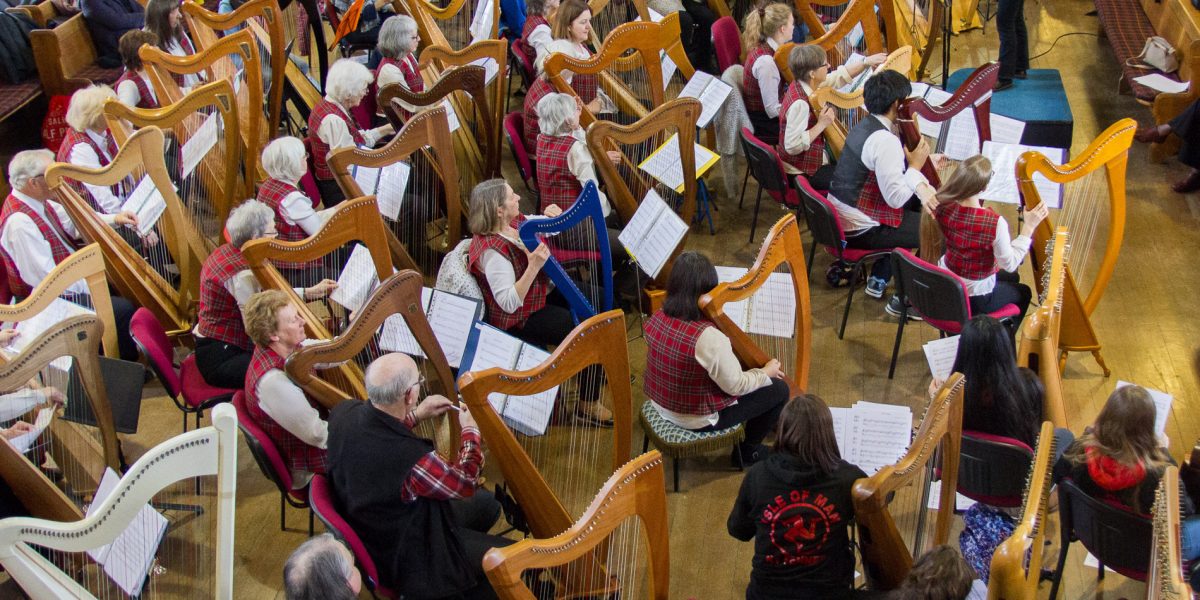 The Festival was born in April 1982 when two young harp makers, John Hoare and Mike Stevens of Pilgrim Harps presented the 1st Celtic Harp Festival (popularly referred to by participants as The Edinburgh Harp Festival) to coincide with the Edinburgh Folk Festival.

The events ran in tandem and shared premises at Edinburgh University’s Teviot Union.  The Festival offered one concert, in the Bedlam Theatre, and two workshops.  That first Festival also included an exhibition of harps from various makers and an opportunity for beginners to learn the basics of harp playing.

From this inspiring start, the Festival continued to grow in that same spirit, providing excellent performances with opportunities to hear, meet and learn from musicians from around the world, to develop new playing styles and techniques and to make lasting friendships.

To continue at this level, financial support was essential. Pilgrim Harps, who are based in Surrey and were therefore unable to access funds from the Scottish Arts Council, invited the Edinburgh Branch of The Clarsach Society to take over the Festival. They ran it successfully for seven years, always with the quiet support of Pilgrim Harps.

Through the hard work and enthusiasm of volunteers and often generous support from the Scottish Arts Council, the Festival continued to grow and flourish with an ever-expanding breadth of concerts and courses on offer for all ages and abilities, while constantly keeping the Scottish harp, the clarsach, firmly at its heart.

By 1991, the pressures of success and growing financial commitments meant that the running of the Festival was passed to the parent body of The Clarsach Society. The Festival moved to the Pleasance with its theatre, rooms for classes, bar and space for some wonderful ceilidh evenings. Volunteers still carried out most of the organisation, assisted by a part-time administrator.

The Festival’s home remained the Pleasance for another 10 years until its continued growth and popularity meant a move to Merchiston Castle School in 2001. By this time, there were nine concerts, including the premier performance of specially commissioned Pieces of Eight by Eddie McGuire to celebrate the 20th Festival.

In 2002, reflecting the world-wide content and the growing number of international participants, the Festival became the Edinburgh International Harp Festival.

Over the next 18 years, the Festival continued to grow.  By 2019, there were 10 concerts, 39 courses and 20 workshops given by performers and teachers from Scotland, England, Ireland, Wales, Galicia, Denmark, Paraguay, Switzerland, Senegal and Israel.  A significant addition to the programme was a concert given by children of school age from all over Scotland.

In 2020, the coronavirus pandemic affected lives and events everywhere, and we had to announce the unprecedented cancellation of the Festival.  The organising team took the decision to ‘go online’ and the first ever Virtual EIHF was born.  It was the brainchild of Rachel Hair, in collaboration with our stellar line-up of performers and teachers who would all have been performing and teaching at EIHF.  Free to all, it was astonishingly successful, and accessed by thousands worldwide.

Our 2021 Festival is being organised by a team of volunteers supported by The Clarsach Society’s Office Manager and the Festival Administrator.  Continuing Coronavirus restrictions require another online event.  Mirroring that very first Festival in 1982, with performers from Scotland, England, Ireland, Wales, Europe, the Middle East, USA and Paraguay, the aim remains to present excellence and diversity in a spirit of inclusion and friendship.